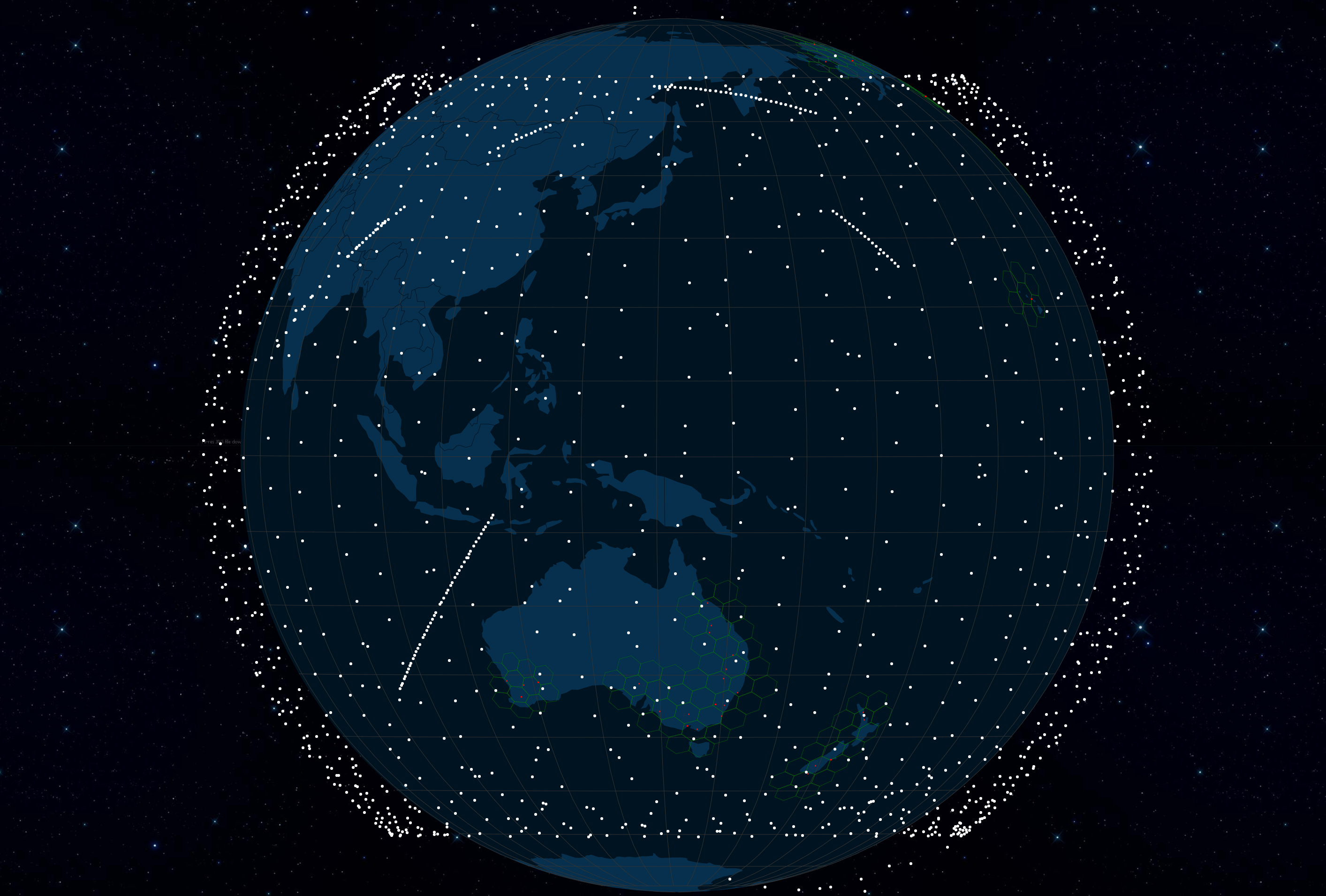 So you have heard about this “Starlink” thing and want to learn more? Travelling full time and want amazing internet everywhere? Read on for my Communications Technician and Full Time travellers perspective on Starlink, as of March 2022.

Who am I? I’m a full time traveller who has been on the road in my caravan for the last 1.5 years, and, unhappy with the Cel-Fi go, I pioneered the widespread use of a panel antenna with a collapsible mast for caravan use, to enhance 3G/4G/5G reception. I was a Communications Technician in the RAAF for 15 years, doing this sort of stuff as a job.

Starlink is an incredible concept, made possible by Elon Musk and SpaceX’s success creating the Falcon 9 re-useable rocket. Starlink is a series of 2000 (At time of writing) small satellites deployed into Low Earth Orbit, about 550km above the earth. The constellation is planned to be around 40,000 satellites when it’s ‘finished’. Each one of the dots below is a satellite, moving quickly in an orbit around Earth. At the time of writing Starlink are launching approximately 50 satellites a week.

Why is Starlink good?

A normal Geosynchronous satellite, such as the NBN Skymuster satellite, or any of the other satellite internet or TV solutions, sits around 35,786km above Australia. It needs to be that high to remain ‘in place’ over Australia and provide services. This means that for you to get a signal to that satellite and down to a ground station, it needs to travel 71,000 kilometers. And then it needs to talk to a server somewhere in the world, go back to the ground station, up to the satellite and back down to your dish and your computer! This means the signal is travelling 142,000km as a round trip from your computer to the internet and back. This leads to high latency, around 600ms minimum. This means that the connection usually feels “laggy” and things take a while to happen.

Starlink has a physics advantage. The satellites are only 550km up, so the signal from your dish to the satellite and back only needs to travel 1100km, which means that the connection is capable of latency as low as 30-50ms, which is really snappy.

In addition, being much newer and with so many satellites in orbit, they can afford to dedicate more bandwidth per user. This means that the normal Starlink speed most users are experiencing is around 100-350 mbps down and 20-40mbps up. Australia’s average internet speeds (including in cities) is 58mbps down and 21mbps up. This means that Starlink is 2-5 times faster than the average Australian internet connection (Very, very fast in other words) In fact, Starlink is so fast that nerds all over the country, even in cities are trying to get their hands on the service.

Lastly, Starlink offer unlimited downloads and uploads in their package. No more watching what you are downloading or streaming, just go for it and enjoy unlimited, very very fast internet.

So in summary, Starlink is very very quick new technology that is as good or better than most people’s home internet connections in Australia.

What about for people travelling?

Starlink is absolutely a game changer for travellers, with some really important to know limitations and caveats.

Portable or not Portable?

Currently Starlink in Australia is not meant to be portable, it’s meant to be used at 1 address, however there are some users that are on a “roaming” beta test which let’s us move around from place to place without having to change our address in the Starlink App. Expect this to become widespread in the near future.

Although Starlink will eventually have complete coverage of Australia, at the time of writing it IS limited, although they have been expanding the service quite regularly. I have included a User Generated map below which I have fleshed out with my own research. If you are travelling in the red area’s, you can likely expect Starlink coverage.

Over the next year, Starlink are launching V1.5 Satellites, these have laser interconnections and will greatly expand the Starlink coverage area, to area’s without Ground Stations, and it will also increase the quality of coverage in existing area’s. I will regularly update this article with updated information as I become aware of it.

This is a big one – Starlink costs one off $850 AUD, and then $139/month. This is a significant cost per month, however it IS unlimited and very high speeds.

At the moment, the Starlink dish is only 240V powered. There are some workarounds, but these will void your warranty and require custom electronics. This means that you will require constant 240V power to maintain your internet connection. The power usage isn’t that high, (50-150W) but you will need to maintain that all day, and all night, unless you want to power the dish off and lose your internet.

I’ve made this heading large, because in my opinion this is the single biggest problem with Starlink at the moment for travellers. Having travelled with it and used it for the last 2 months, it’s very common to get a campsite that has tree obstructions blocking the view of the dish looking Up and South. In our experience, we have been trying and around 70% of the campsites and caravan parks we have been too have had issues with obstructions dropping the signal. Caravan parks are worse because you usually don’t get a choice of spots, and even with the 30m cable that Starlink comes with, it can be impossible to get an unobstructed view.

We have seen improvement from Starlink in this time, they have updated the algorithms a bit to avoid obstructions, and in the future as they get more and more satellites in the air, there should theoretically be less chance of obstructions blocking your satellite view. I am also working on a mount to let me mount the Starlink dish to our normal “Overland Exposure Travellers Internet Kit” mast to get some extra height. – https://overlandexposure.com.au/how-to-get-internet-anywhere-in-australia-remote-internet-guide/

There are a few brave souls who are testing this out, such as Marcus Tuck – https://www.tuckstruck.net/truck-and-kit/geekery/starlink-mobile-roaming/ It looks like it will work, however we are waiting for a proper “Mobile” version of the system to test out before recommending it 🙂

So what would I recommend about Starlink for Travellers? As of March 2022,